Boat, an Indian audio product company, has quickly risen to the top of the inexpensive audio product market, thanks to online sales. The Boat Airdopes 441, priced at Rs. 2,499, is a feature-rich new headset that offers a lot for a low price, including IPX6 water protection and USB Type-C charging. 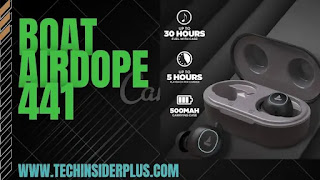 It has IWP (Insta Wake N' Pair) Technology, which turns on the earphones and sets them in connection mode as soon as the carry case lid is opened.

It aids in staying on track. With up to 5 hours of music per charge and an extra 25 hours of playback bliss with carrying a combi charge case, you'll be tuned into Nirvana for a long time.

It has 6mm drivers for deep sound and thrilling audio enjoyment.

It has an IPX7 rating for water and sweat resistance, allowing for worry-free listening.

With the help of its innovative capacitive touch controls, you can use the instant voice assistant with only a single touch.

The boat airdopes 441 has been technically and artistically developed, providing exceptional style and secure-fit ear hooks to cater to the requirements of everyone who enjoys music.

The official price for boat airdopes 441 is ₹2,499. You can get these headsets at this rate on the official website of Boat.

The boat airdopes 441 is available on Amazon and Flipkart as well for you to buy.

The Boat Airdopes 441 comes in five different colors, all of which have a black basis. Different colors are used for the logos on the earphones and case, as well as the interior area of the charging case.

The earbuds have an IPX6 water resistance rating, indicating that they can withstand a significant level of water exposure, making them perfect for a variety of outdoor and fitness activities.

Each earphone has a touch-sensitive zone on the outside.

Both Boat airdopes 441 and 441 pro have almost similar features. One of the biggest features that are different between them is their battery size.

Also Read: How To Shut Down, Sleep Windows 10 With A Keyboard Shortcut

Q. Does boat airdopes 441 have a microphone?

A. Yes, these airdopes have an inbuilt microphone in them.

A. Not only water but the boat airdopes 441 come with sweat resistance too.