Home tech-facts What Is Distributed Cloud Computing? and it's Infrastructure

What Is Distributed Cloud Computing? and it's Infrastructure

Several of the uses of cloud computing technology are distributed cloud, which is used to connect data and applications served from different geographical locations. The term "distributed" in the context of information technology (IT) refers to something that is shared among numerous systems that may be located in different locations. Distributed cloud speeds up worldwide service communication while also allowing for more responsive communications for any given region. 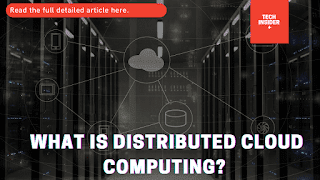 Public cloud, hybrid cloud, and edge computing are the three types of distributed cloud. For many years, public cloud providers have supported numerous zones and regions. Public cloud services (often including necessary hardware and software) can now be distributed to other physical places, such as the edge, with packaged hybrid offers.

Distributed cloud is a public cloud computing service that allows you to run public cloud infrastructure in multiple locations, including on-premises, in other cloud providers' data centers, and in third-party data centers or colocation centers, all while managing everything from a single control plane.

With some of this focused, centralized application of available cloud services, our organization may deploy and run apps or specific application components in a combination of cloud locations and settings that best fits your requirements for performance, regulatory compliance, and more. Operational and administrative inconsistencies can occur in hybrid cloud or multi-cloud settings. This issue is solved by using a distributed cloud.

It was also known as ad-hoc clouds or peer-to-peer clouds.

You've probably heard of distributed computing, which is when programme components are deployed across multiple networked computers and communicate with one another via messaging or APIs, to enhance overall programme performance or maximise computing efficiency.

Distributed cloud, in effect, extends the provider's centralised cloud by deploying micro-cloud satellites across the globe. All distributed infrastructure's operations, updates, governance, security, and dependability are under the cloud provider's responsibility. And the user sees everything as a single cloud, including the centralised cloud services and satellites wherever they are, and manages it all from a single control plane. Distributed cloud fixes with hybrid cloud and hybrid multi-cloud break, as industry researcher Gartner puts it.

Also Read: How To Shut Down Windows 10 With A Keyboard Shortcut

The Advantages Of A Distributed Cloud

Distributed cloud computing provides consistency and dependability, as well as geo-replication, which helps to cut costs.

The with support of remote replicas that can rapidly reset in the event of a failure, the distributed cloud also provides immediate fail-overs.

The distributed cloud allows complex tasks and data to be broken down into smaller pieces and includes several computers that can work on them simultaneously.

The Disadvantages Of A Distributed Cloud

It's tough to maintain, deploy, and troubleshoot distributed computing systems. These complexities necessitate not only hardware but also software capable of handling security and communication.

As compared to a single machine, the deployment cost of dispersion computing is higher. The overall cost is further increased by the processing overhead caused by additional computation and exchange.

Data access in a centralised computing system necessitates greater maintenance and security, making the security of dispersed systems challenging to handle. Users must control the replicated data delivered in many locations in addition to the network.

Financial performance is one of the most essential advantages of Cloud computing. Not only are you saving money on infrastructure, but you're also saving money on teams to monitor and repair the gear. Your employees' saved and enhanced bandwidth can be put to better use elsewhere.

Auto-updates: You are kept up to date on the newest advancements and modifications, including the software's auto-update. You won't have to bother about configuring or integrating software because it happens automatically. Furthermore, your remote employees can use cloud services at any time and from any location, increasing their productivity.

Quick deployment: Cloud computing allows you to launch the service in only a few clicks. The speed with which the service is provided provides for a more rapid deployment of the resources required for the entire process.

Infinite storage: With the cloud, you always have the benefit of unlimited storage, so that's one less thing to worry about. Plus, there's more. It's adaptable. You can increase your storage capacity at any moment by paying a small monthly cost.

Data backup: Another benefit of cloud computing is the ability to rapidly and easily restore data, which is time-consuming in an on-premise system.

The Value Of Distributed Cloud Computing

Cloud services provided by public cloud providers are “distributed” to several physical locations. Low-latency computation is enabled by operations being physically near to individuals who require the capabilities. This also ensures a standard control plane for administering cloud infrastructure across both public and private clouds. These things, when combined, can yield significant performance gains by eliminating latency concerns and lowering the risk of global network-related failures or control plane inefficiencies.

Distributed cloud deploys cloud compute, storage, and networking substations in strategic locations that can serve as shared cloud pseudo-availability zones. The word "substations" was coined by Gartner to conjure up images of subsidiary stations, such as branch post offices, where people congregate to get services.

Distributed Cloud’s Role In The Future Of Work

COVID-19 fueled the global economic downturn, but it also hastened the growth of the digital economy. Microsoft Teams, Zoom, and Cisco Webex are among the most popular online collaboration platforms, and for good reason. Cloud services' distributed nature makes them ideal for handling virtual tasks.

Distributed cloud services allow cloud services to be distributed over several physical locations, such as delegating administration and governance to a public cloud provider or extending public cloud services to a private edge cloud. Traditional cloud computing aimed to provide people with access to cutting-edge technology without requiring in-depth knowledge or professional skills. In this fashion, cloud computing has been pivotal in managing the on-demand availability of computer system resources, particularly computational power and data storage.

Also Read: What Is Realme's MagDart charging? Is this Magsafe's copy?