Home review What Is Realme's MagDart charging? Is this Magsafe's copy?

What Is Realme's MagDart charging? Is this Magsafe's copy?

In recent weeks, realme has been teasing its magnetic wireless charging technology, and today the firm has made it public. It demonstrated the technology in its realme Flash prototype phone, as well as a series of MagDart goods. 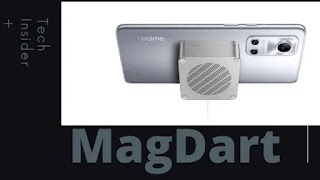 realme has unveiled the realme Flash concept phone, which is the first Android smartphone to integrate MagDart magnetic wireless charging. It has a curved screen and a curved AG glass back, is powered by Qualcomm's Snapdragon 888 SoC, has triple rear cameras, and a 4500mAh battery.

The realme MagDart wireless charging will fully charge the 4500mAh battery on the phone in 54 minutes at 50W rates and will charge 20% in 5 minutes. The 50W MagDart charger is a clip-on device similar to Apple's MagSafe charger, and it boasts 1.5mm magnets and an active air conditioning mechanism to prevent overheating.

Along with the 50W magnetic wireless charger, realme also unveiled a thin circular 15W MagDart charger, a Two-way MagDart power bank that can also serve as a vertical charging station, a MagDart Wallet that can hold up to three cards, and the MagDart Beauty Light, a 60-LED light for portrait photography.

Finally, the business revealed a MagDart case for the realme GT smartphone, which allows for MagDart wireless charging for that device.

With the MagDart Fusion Plan, realme intends to develop an ecosystem that provides technical standard support for further inventions and collaborate with more individuals to make creative magnetic accessories. In the future, it will open the MagDart standard to everyone, expanding its applications and possibilities and embracing more helpful and cool goods, whether they are AIoT devices or accessories.

There's no word on when these devices will be available, but future realme phones should be able to support this technology.

Also Read: How To Shut Down Windows 10 With A Keyboard Shortcut