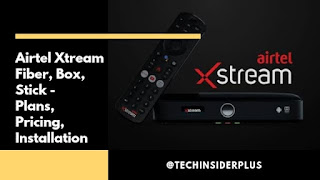 What Is Airtel Xstream?

Airtel Xstream is an OTT platform that provides you with many entertaining services through the internet like Movies, Web Series, TV Shows, Live TV, etc. It is a revamped version of Airtel TV and has a new interface with more channels added. It offers more than 350 Live TV channels, more than 10,000 movies, and TV shows across multiple genres. All of this is available in 14 different languages as well. You can access Airtel Xstream via the Airtel Xstream App or Airtel Xstream Box. Airtel has also launched the Airtel Xstream Fiber in its Airtel Xstream Bundle Plan. It will help the users to watch content in high definition, and they'll get the luxury of unlimited data at faster speeds.

What Is Airtel Xstream App?

Airtel Xtream App is a revised version of the Airtel TV App and is a free video app available on both iOS and Android. It facilitates the users to stream Music Videos, 350+ Live TV channels, more than 100 TV shows, and more than 10,000 movies. All of these are available across 14 different languages. Airtel Xstream App is not available for Android TVs as well. To activate Airtel Xtream Apk on your Android TV, you need to go to the play store from your TV home screen, search Airtel Xstream and install it.

What Is Airtel Xstream Box?

The Airtel Xtream Box is a DTH television box. It helps users to convert their televisions into smart TVs. Users have the luxury of watching their favorite TV shows and movies on their big TV screens. It enables users to enjoy all this content via different OTT apps like Hotstar, Amazon Prime Video, Netflix, etc.

Benefits:- It has Chromecast built-in with voice search enabled. You can use a mobile as a remote and will get Airtel Xstream App Premium.

Benefits:- You will get premium video quality with Dolby Digital sound. You can record and play. You will get more channels.

Benefits: you will get one year of Amazon Prime at no extra cost, more than 5,000 apps on the TV, voice search enabled. You can use a mobile as a remote. You will get Zee5, Hotstar, etc.

What Is Airtel Xstream Stick?

Airtel Xtream Stick is a small device that has a Chromecast in it. It connects with a TV via the HDMI port and lets the user stream different OTT apps.

Airtel Xtream Fibre is one of the fastest broadband services provided by Bharti Airtel via the fiber-optic connection. It lets the users connect up to 64 devices at a time; without affecting the internet speed. The Airtel Xstream Fibre was earlier known as Airtel Viber. It offers an ultra-fast speed of up to 1Gbps.

Airtel Xtream Fiber offers four plans to its users. These plans are:

How to apply for Airtel Xstream Fiber?

Follow the below steps to apply for the Airtel Xtream Fiber:

After this, they will send your details to the nearest office, where they will do the FTTH connection provisioning. If the connection is available in your area, Airtel Official will contact you (nearer to you), and he will ask you to complete the KYC formalities.

The Airtel Xtream Fiber Installation Charge is Rs.1000. However, if you want to opt for Annual Rental Plans for 6/12 months, you will get a waiver on the installation charge, and you will be eligible for an assured discount.

Note: This article is valid in these states and union territories.